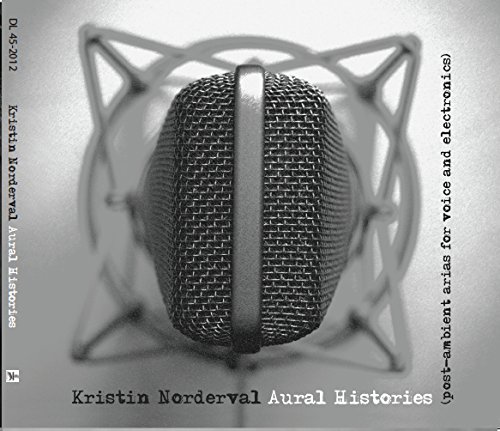 Kristin Norderval cut her musical teeth touring with Einstein on the Beach in 1992, went on to record works of American composers such as Tania Leon, David Lang, and Anne LeBaron, improvised in the New Circle Five with Pauline Oliveros and Susie Ibarra, and co-founded the electro-acoustic duo Zanana with trombonist Monique Buzzarté. Now she has released a solo CD of her works for voice and laptop. The composer writes: Aural Histories is a compilation of works for voice and electronics. None have lyrics, but they all have stories. Some are improvisations recorded in one take with live sampling and audio processing in real-time; others are electronic compositions with varying degrees of vocal improvisation; and still others are through-composed electronic works. Some use the voice alone as sound source, and others contain pre-recorded and processed sounds of machines and electronic equipment, from coffee machines and microwaves to incubators and antique motors. Quoting from the liner notes of Nina Sun Eidsheim really does tell the story: One might be tempted to listen to and discuss Kristin Norderval s music in terms of her awareness of and grounding in European and North American music cultures. Beyond opera, such a discussion would also conjure resonances of mediaeval chant, folk music, extended vocal techniques, musique concrete, minimalism, popular music and much more. But to reduce this music to its historical awareness, lineage, and technical mastery would be to muffle it, flattening the listening experience into a drop-the-needle exam. Norderval s music actively resists such listening. Instead, it seeks to show us that listening cannot be contained by a hands-off, objective mode that follows a predetermined analytical model. The thematic figure this music draws, then, is listening. While it is a music that invites us to listen, it is also a music that listens. By music that listens I mean listening as witnessing: the composer s ears are open to both joy and suffering in the world. Kristin hears the voices that are often drowned out by the 24-hour news cycle or, as she puts it, are not newsworthy. She listens to people and things alike because she knows that they are interconnected and that one s faith is the other s destiny. This is a music that offers a resounding answer to Peter Szendy s question on the role, and the authority, of the work. Kristin s music answers: there is no Work, no key to unlocking its mystery. There is only you, me, and our encounter with the music this is its resistance to the dominant narrative. Following Daphne Brooks, this music has its ear to the subterranean feminist archive. Zooming further out, alongside singers and composers including Meredith Monk, Anne LeBaron, Juliana Snapper, and Mendi and Keith Obadike, Norderval s work fits within [...] a contemporary U.S. feminist opera that seeks to denaturalize singing, listening, and sound. This is work that faces rather than masks sound s dependency on material transduction. Furthermore, it never forgets that sound always sounds in a three-dimensional setting even when played through speakers or headphones, as will be the case with this CD. [...] For Kristin Norderval each sound s specific location in space is a significant compositional parameter. Aural Histories is not a linear sound trajectory; instead it is an invitation to step into any of its ten different scenes. The doors are open to you, the listener: please enter.
Show More
Reviews

Disclaimer: The price shown above includes all applicable taxes and fees. The information provided above is for reference purposes only. Products may go out of stock and delivery estimates may change at any time. Desertcart does not validate any claims made in the product descriptions above. For additional information, please contact the manufacturer or desertcart customer service. While desertcart makes reasonable efforts to only show products available in your country, some items may be cancelled if they are prohibited for import in New Zealand. For more details, please visit our Support Page.