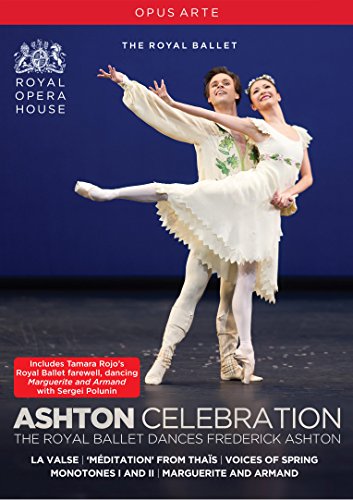 Frederick Ashton, Founder Choreographer of The Royal Ballet, was one of the 20th century's most influential choreographers, whose musical, subtle and graceful style and extraordinary gift for storytelling had a profound impact on the development of British ballet. This special programme, performed at the Royal Opera House to mark the 25th anniversary of Ashton's death, presents five works that demonstrate his astonishing versatility, from compelling abstract ballets – such as the exuberant Voices of Spring and the radically modernist Monotones – to the tragic love story Marguerite and Armand, brought to life with ‘performances of heart-wrenching intensity’ (The Observer) by Tamara Rojo and Sergei Polunin. Works Ravel: La Valse Massenet: Meditation from “Thaïs” Satie: Monotones I & II Johann Strauss II: Voices of Spring Liszt: Marguerite and Armand Press Reviews "... a performance of such dramatic intensity that the audience sat in silence, as if afraid to breathe. Ashton turned the story of the tubercular courtesan Marguerite into a one-act ballet, set to Liszt, designed by Cecil Beaton, to show off the partnership of Margot Fonteyn and Rudolf Nureyev; its headlong rush from first love to deathbed reconciliation requires dancers of similar charisma. In Polunin and Rojo it has them. Polunin's talent doesn’t just lie in the elegance of his arabesques, the speed of his pirouettes, or the height of his jump - all of which are fully displayed here - but in the way he can make you believe he is living the part he plays. Here he traces Armand's story with spellbinding clarity: his stillness when he first sees Marguerite, the ferocity of his public renunciation of her, the tenderness of his love - each step has meaning. His passion is more than matched by Rojo, whose emotions are not only etched on her face, but in every muscle of her expressive body. She is simply wonderful. Their magnificent performances brought to a close a bill which revealed the variety of the Royal's founder choreographer from the perfumed sway of La Valse, to the lyrical loveliness of the Thais pas de deux, and the audacious joy of Voices of Spring. Monotones I and II, on the other hand, show his geometric modernism and his ability to conjure a kind of mysterious beauty by the simplest of means... the performances throughout the evening made the choreography look as fresh and important as ever." (The Daily Telegraph) "... performances of heart-wrenching intensity ...Polunin stalks the stage like a panther, his every breath and gesture a cry of longing for Rojo's ailing, consumptive Marguerite ... and while his dancing is faultless, it's the other things that you remember. His burning gaze. The ferocious tenderness of his touch. The terrible desperation with which he buries his face in her neck ... Rojo has never been more incandescently beautiful, nor more vulnerable. " (The Guardian) Cast Leanne Benjamin (Meditation) Valeri Hristov (Meditation) Yuhui Choe (Voices of Spring) Alexander Campbell (Voices of Spring) Edward Watson (Monotones II) Tamara Rojo (Marguerite and Armand) Sergei Polunin (Marguerite and Armand) Orchestra of the Royal Opera House; Emmanuel Plasson Production Company: The Royal Ballet Television Director: Margaret Williams Choreographer: Frederick Ashton Disc Information Catalogue Number: OA1116D Date of Performance: 2013 Running Time: 84 minutes Aspect Ratio: 16:9 Anamorphic Label: Opus Arte
Show More
Reviews

Disclaimer: The price shown above includes all applicable taxes and fees. The information provided above is for reference purposes only. Products may go out of stock and delivery estimates may change at any time. Desertcart does not validate any claims made in the product descriptions above. For additional information, please contact the manufacturer or desertcart customer service. While desertcart makes reasonable efforts to only show products available in your country, some items may be cancelled if they are prohibited for import in New Zealand. For more details, please visit our Support Page.